Quick post. I made Mothers Day cards this year. Since I sort of have a mother-in-law (mother-in-law-to-be?), I thought this was the year to start giving her cards. I hope neither mom will be insulted, but I made the same card with very slight variations (different colors/different embossing on the inside). For the moms:

When I said I've been mostly doing nothing...that was a lie. A nice little white lie, but a lie. I've been busy wedding planning (pretty much done) and sewing. Knitting has stalled. I broke a needle on the project I was working on -like an idiot, i tried to put on the sock while I was still knitting it (it looked way small) and crack went the needle. So this is a sewing update for you!

First, I finished my set of potholders. I got much better at piecing and quilting lines. I'm pretty much at the same skill level with the binding (not terrible but not smooth and perfect). And I wound up with a potholder I'd call my favorite! I actually love one of them. This one:
And here's the full set. Remember, I screwed up my measuring/seams on the first one I did...which is why it is small in comparison. 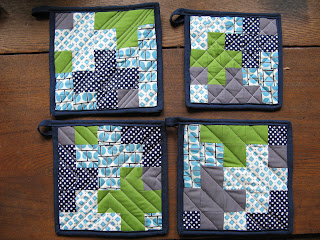 I spent a chunk of hours cutting out all of the squares for a second set of potholders, to be made for my sister and her husband: 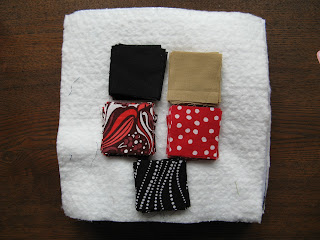 In other sewing news, I spent one full day butchering a set of curtains my mom had made for my old apartment. You can see them in said apartment (sort of) in a picture here. Those windows were huge: tall and wide...and those curtains didn't really fit anywhere in the house. We were/are using them on basement windows to "hide" all of loml's music gear from would-be robbers (his paranoia, not mine). But they were huge for the windows. So I cut up one curtain to make three for basement windows and then sewed an insanely basic hem on any cut sides. Basic because eventually I think loml would like to pick his own fabric for those windows. It surprisingly took a long time - for something that sounds so simple.

I also went on two shopping expeditions with a friend to pick out fabric for her housewarming gift: curtains. We bought it last weekend and I'm in the process of deciding on a curtain type..and then I'll begin the insanely scary task of cutting. You can rip out seams...but you can't undo a poor cut. Here's a picture of that fabric in its raw state: 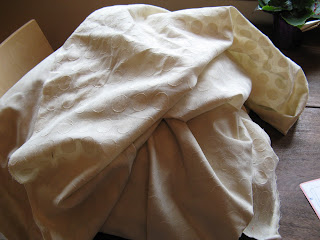 Lots more fun with my sewing machine to come. I'll try to update in parts, rather than in a huge chunk.
Posted by Katie at 3:11 PM No comments:

Umba box day! Sorry for the lack of posts. I'm busy doing nothing (yay!). This month was another three item spectacular. Still in love.

Two hairpins! A green and a yellow. I love them. They're wooly and cute. I just have to figure out how to use them in my boring, boring hair. Tomorrow I may take a stab at it! From Willow Handmade.
Lip gloss! Picture below is not the specific version I have - I received Summer (fitting!). It says "scented with Garden Herbs". It feels pretty nice and has a spicy smell. From Stewart & Claire.

Smelly candle! This candle packs a wollop of smell. I don't know how to describe the smell. It's fairly perfume-y. I think I'm going to put it in the bathroom that holds the litter box. The version I got is much smaller than the one on the site (20 hour burn time). From Patch NYC.