I feel a bit weird talking about dieting here, it feels weirdly personal and yet is something every woman talks about all day every day at the office. I also have a sister who is strongly against dieting, so sister, take cover or stop reading or whatever.

Let's back this diet story up, back when I started dating loml I was a fairly healthy weight for my height. I was maybe a few pounds to the heavier side, but truly, I was in a good place. And then loml and I ate. And he recognized my true joy in sweets and treated me with them. And then we moved in together and my eating habits took a further nosedive into unhealthy land. And in that process I gained almost 25 pounds. Kind of a lot for a short girl. So it's time for those 25 pounds to go. I can eat what I want, just not so damn much of it and not so often.

Enter myfitnesspal.com and calorie counting. I suck at getting to the gym regularly, so I have yet to work that into this plan. It seems possible that I'll need to exercise once my inevitable plateau hits, but for now I'm just being conscious of what I put in my mouth. And really enjoying it. I have one cheat day a week where I eat whatever I want and don't care what calories are involved. For the rest of the week I mostly manage to work in anything I want (for example, some really fantastic eating and a weird tasting abandoned apple has enabled me to schedule a Kinder Hippo and Smart Ones ice cream sundae for later).

The only thing that is really drastically reduced is how often I eat out. Because nothing is healthy at restaurants. Or two things are and they are meh. This is actually producing a fun side effect of us cooking more at home. A lot of chicken, some kind of icky pork chops, beans and rice, oh my! For my first recommendation...those skillet sauces from Frontera? Those are tasty. Pick some up.

I have spent the past 19 waking hours or more knitting. I tend to get myself in to the following predicament: I plan a project for an impending baby, I knit like a snail for five months and then suddenly the baby is imminent and I've got half a project. So for the past five months, I've been snailing on this: 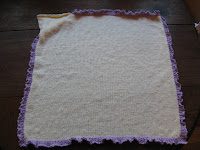 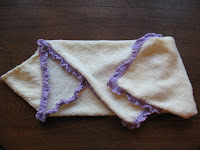 In case it's not clear, it's a baby blanket, with a little hood so that you can burrito wrap your baby (maybe even good for use as a towel). This baby girl is going to be born a Phoenix Suns fan, so I went with purple instead of pink.

And then the last bit of my knitting spree, I whipped up these little cuties to go with the blanket: 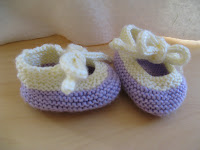 I've made these guys before, but with a button clasp instead of ties. And I think the bow turned out far cuter.

Hopefully my cousin doesn't read this blog as this baby present is shipping tomorrow and the surprise would be ruined. I'm pretty sure I know all five of my readers though, so I'm not too worried.

Now I need to find my next knitting project...
Posted by Katie at 3:40 PM No comments:

I thought I would throw together a quick post tonight - loml gifted me with the awesome umba box for my birthday. I've received three so far and I'd love to share the goodies I get here. It is honestly the best surprise every month. In the future if I can't find an exact image online, I'll take my own. But for this quick consolidated post, you'll have to make do with descriptions.

Month 1:
Stationery from PoochiePrints. It is quite lovely and the lined envelopes rock my world. I think I have two cards left...not sure how I'm going to convince myself to send them off. As well as a lovely drippy tree branch 5x5 from this shop. Mine is made with a lovely gray/black leather. It smells fantastic and is clearly well made. I'm not sure what I'll use it for just yet, but..something. It wants to be used...

Ah, Sunday. I just spent my day being the most domestic kind of gal - I did laundry, I tidied, I vacuumed, I cut up a pillowcase and tested my sewing machine tension and then I cut out 72 two by two inch squares. I have 48 more to go. Then there are a few bigger squares...and then I'll make my first go at quilting. I'm pretty excited to see if it works at all. If it does, I'll have some potholders that really don't match my kitchen (but made with fabric I really like). If it doesn't go well, on four out of four potholders, I'll be pondering another investment in a class at Lill. Fingers crossed everyone.

In other news, I dipped my toe in to the world of wedding dresses and came out with this information:


Off to await the pot pie that loml has been constructing for a large part of the day. Does anyone else find that a recipe preparation time is generally half the actual time needed?
Posted by Katie at 6:45 PM No comments:

Hey! Remember when I wrote a post about my sewing class and how I had sewn a rectangle? Well, since then I made a whole bag. And graduated. 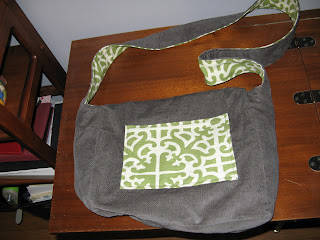 To be fair, there was no graduation. But I think my bag kicks ass. It's reversible too! It was pretty difficult to get a good picture of it, I have 20 pics of me wearing it in the hall mirror. And all of them are big piles of suck.

I really liked the class and have a few follow up projects planned. A couple of them are just straight test projects - I need to learn how my machine works (we used Singer's in class and I have a Brother). I foresee some tension issues. So I'm making fake curtains from old sheets and a bunch of totally random old sheet projects. Anyone need something made out of an old sheet?

The other project is from an awesome book I got for Christmas...a few years ago now: Dare to be Square Quilting. I'm going to start small and try to make some potholders. Loving textile crafts.
Posted by Katie at 10:25 PM 1 comment:

I've officially had my first terrible etsy transaction. (To be completely honest, I have a second kind of bad one also happening at the same time, though this second one does appear to be the fault of the USPS).

When loml and I discussed marriage/engagement/rings, I asked him if he would wear an engagement ring as well. He is promising the same level of commitment to me that I am to him, so if a ring = ownership, then we own each other. He agreed, we found a ring pretty quickly on etsy and I purchased it. This was on December 5.

The store in question had a stated 3 week lead time. Though she was also, at that time, not taking any orders to be fulfilled by the holidays (makes sense as they were basically three weeks away). So I was imagining getting a ring some time in early January. We still have not received it. That makes almost 9 weeks.

I emailed the seller multiple times: through etsy and through her normal email (you receive the seller's email in the invoice when you place an order). I never received any response at all.  Not even an "I'm behind, so sorry, it will be 4 more weeks". I started to research the situation and the seller had closed a previous store for dubious reasons ('split business' though making the same rings + new ones?). And it appeared at the old store there were quite a few disgruntled customers. So now I have no ring, I'm out a substantial amount of money and it appears this seller is...not all that reliable.

Next step...researching etsy's issue reporting. They have a "non-delivery report" which is basically a mediator - etsy sits in the middle and tries to resolve the issue.  However, since I paid via paypal, the only way to get a refund is to go through paypal.  Which has a deadline that issues must be reported prior to 45 days post purchase. 45 days had passed. So I open a non-delivery report. The issue mediation says it can last up to 5 weeks - I figure after that time, I can go to paypal and beg for my money back.

Three days after my non-delivery report, I got an email from paypal that my item shipped. And a few hours later, a sob story email from the shop owner that the holiday season was tragic for her family, she asked someone to help her respond to emails/they clearly didn't, etc. I feel heartless now giving her a negative review, but I think I have to. She non-responded to all my emails, which were sent after her store had reopened (she closed/didn't take new orders for much of December). Even if you are behind, a 3 minute email explaining would have done wonders (and you clearly can write emails as your novel of an apology attests). I wouldn't be disgruntled had I received a new time estimate. She could have written a quick form email and sent it to all her waiting customers - and clearly it was necessary.

Because this review just showed up in her shop:

Worst customer service experience I've had in a long time. And I imagine the ring is going to be beautiful. I guess this is a lesson many people never learn: no matter how good you are at your job or the quality of work, if you don't sell it/treat people well, you may as well be producing crap.
Posted by Katie at 11:38 AM No comments: